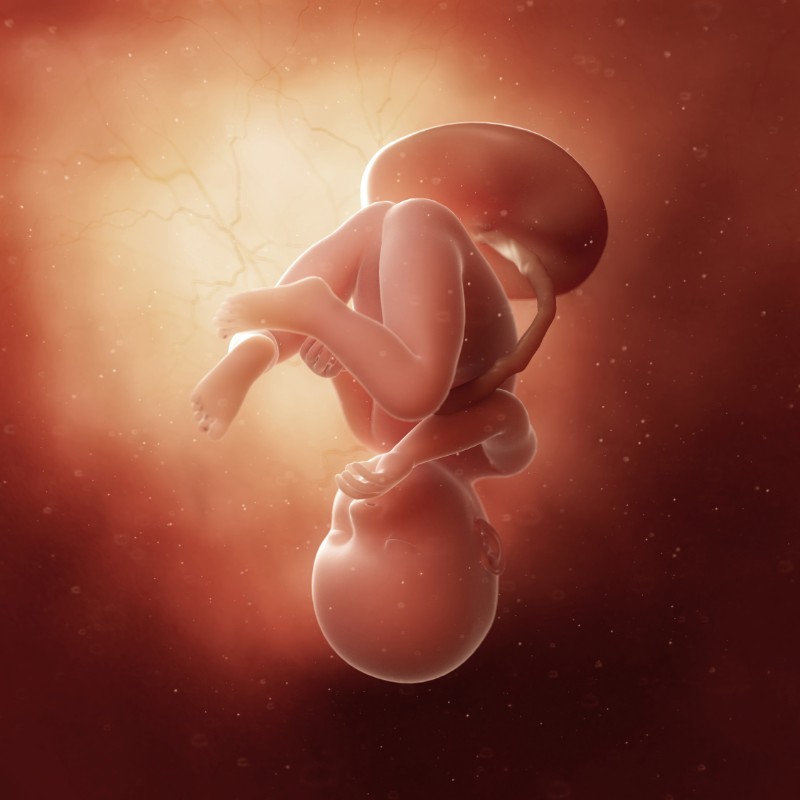 Eighty-eight percent of babies are born within two weeks of their expected dates of delivery (EDD), either early or late. You and your baby are two weeks from that time frame now.

Fetal blood flows through two umbilical arteries and one umbilical vein. During late pregnancy, a soft blowing sound called 'funic souffle' can be heard over the location of your baby’s umbilical cord.

Your baby will now automatically turn toward a source of light. This is called the 'orienting response' and permits your baby to practice being more aware of its environment.

Because the baby’s quarters are so cramped at this point, when it moves, the contours of its arms and legs make moving bulges on your abdomen. It should be fairly easy for you to identify the baby’s arms and legs, but you may confuse the head with the buttocks through the stretched skin of your abdomen.

Your baby’s body is probably taking on a rounded, plumper look as the weight it gains is primarily white, subcutaneous body fat. This plumpness is normal and healthy and unrelated to later obesity.

You will notice that for several weeks after birth, your baby will maintain the fetal position it was forced to assume in the uterus, because its muscles are used to it.

Your vaginal discharge will become heavier now and will contain more cervical mucous. The discharge may be streaked with recent (reddish or pink) or oxidized (brown) blood after intercourse or after a pelvic exam. Bright red discharge or persistent spotting should be reported to your practitioner immediately.

Braxton-Hicks contractions - false labor pains - are believed to facilitate circulation to and through the placenta by stimulating the movement of the blood.

As you approach delivery, the amniotic sac (bag of waters) may break. Generally, it’s more of a trickle than a gush. If you’re concerned about fluid leakage when you’re not at home, wear a pad or panty liner to absorb the moisture. Amniotic fluid has its own distinct odor and can easily be distinguished from urine. Contact your practitioner if you think you’re leaking amniotic fluid.