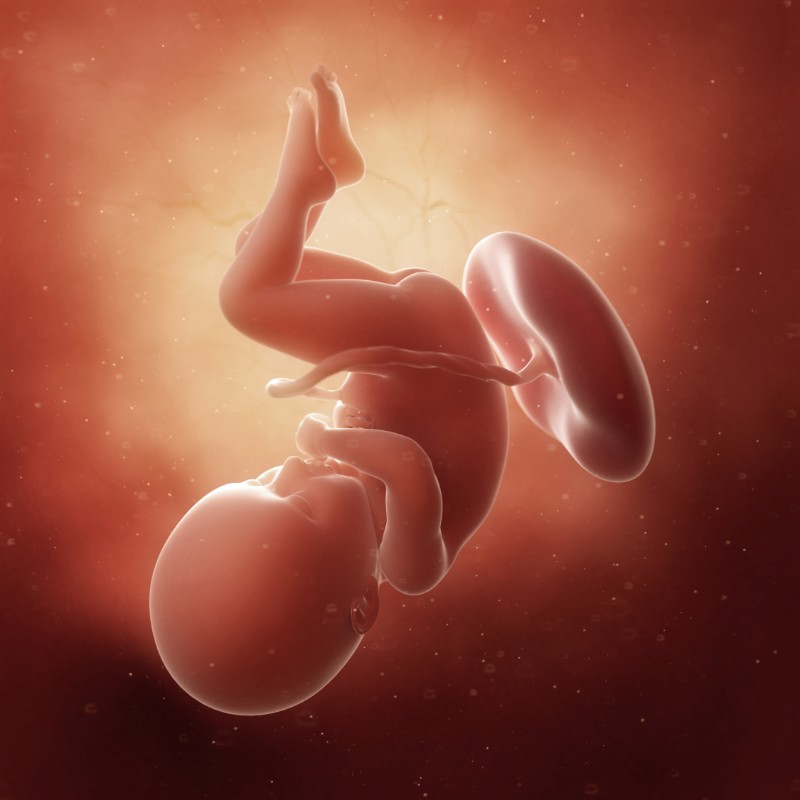 From this point on, the 'finishing period' of growth begins, during which your baby prepares for its birth.

Your baby’s gums are now ridged and may look at first like teeth are about to erupt.

Your baby may become quite chubby if you overeat during this time. Even with normal weight gain, the baby now fits snugly in your womb and can only turn from side to side.

You’ll notice more fluctuations in your energy level this month. Fatigue is experienced by most pregnant women, but this month, you may find that fatigue alternates with periods of extra energy. Use your energy bursts wisely doing things you absolutely need to do and preparing for the birth and time after birth. Don’t overdo it, though! You might need to conserve some of that energy for later.

Your baby needs to eat even when you’d rather not. Several small meals a day are still best at this point for most women.

By the time the baby is born, the fully developed placenta covers 15–30 percent of the space inside the uterus and will weigh 5&frac12; pounds! The placental tissue itself weighs a mere pound and a half, but it takes 4 pounds of blood to keep it functional. While your appetite and energy levels might fluctuate, you’ll probably notice more rather than less swelling of your ankles, feet, hands, and face during these final weeks. About 40 percent of women have slight ankle swelling during the last twelve weeks of pregnancy. This swelling generally disappears with rest and is rarely present in the morning. Any swelling you have that is associated with pain or swelling that does not disappear within twenty-four hours should be reported to your doctor or midwife.

Clear or pink-tinged mucous in your underwear may be a sign that the mucous plug, which seals the opening of the uterus, has dislodged. This usually means that the cervix is beginning to dilate and that true labor may be days or even hours away.