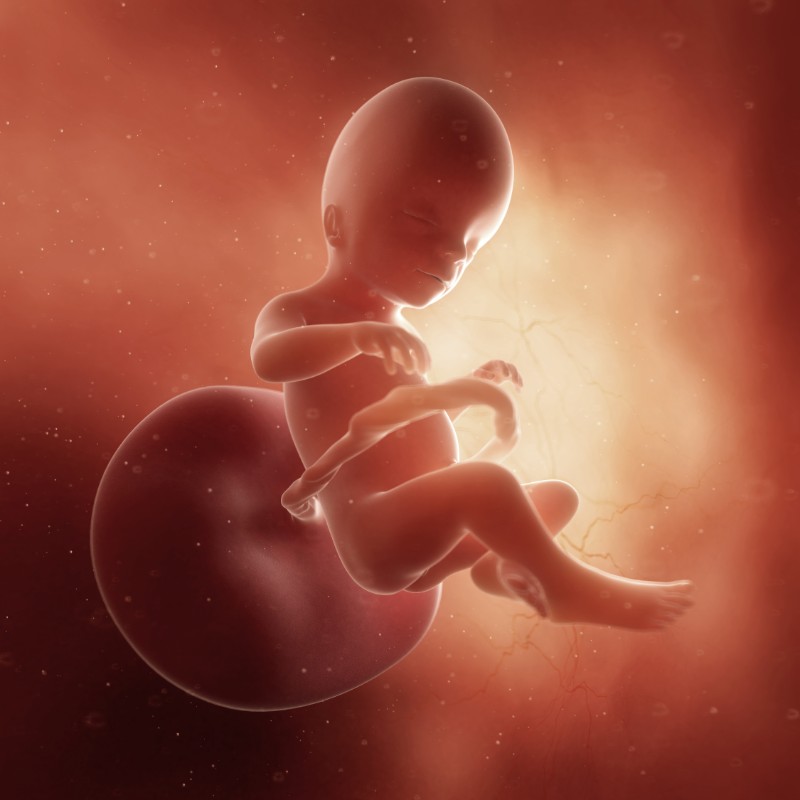 By this week, heat-producing brown fat begins to form at the base of your baby’s neck, by the breastbone, and near the urethra - the tube that passes urine out of the body. Brown fat has a protective function: it helps keep the baby warm in cold environments. Brown fat exists in newborns, but only vestiges of brown fat remain to adulthood.

The baby sleeps and wakes as much as a newborn does now. When your baby sleeps, it characteristically settles into its favorite position. Some babies always sleep with their chins resting on their chest, while others tilt their heads back.

The baby’s movements are becoming stronger as soft cartilage continues to harden into bone to form baby’s skeleton. Most women feel movement for the first time between weeks 19 and 21. Mothers who are slim may feel their babies move much earlier than heavier moms will. Feeling movement can help form the attachment or emotional bond between you and your baby that will last a lifetime.

From week 14 to week 22, the placenta weighs as much as, if not more than, the baby because it must deal with the metabolic processes of nutrition. The fetal organs are not yet sufficiently mature to process food.

The linea alba, or white line, between your navel and pubic hairline generally becomes clearly pigmented during pregnancy. After it is pigmented, it is known as the linea nigra.

If you are a brunette, your pigmentation changes will be more pronounced than if you have naturally lighter hair. Your pituitary gland seems to be responsible for the pigmentation changes: it releases more melanin (pigmentation) stimulating hormone during pregnancy than when you’re not pregnant.

Generally, the baby will be born about 147 days (plus or minus 15 days) from the time the mother first feels the baby move. Make the calculation and see how close it comes to the actual day of your baby’s birth.