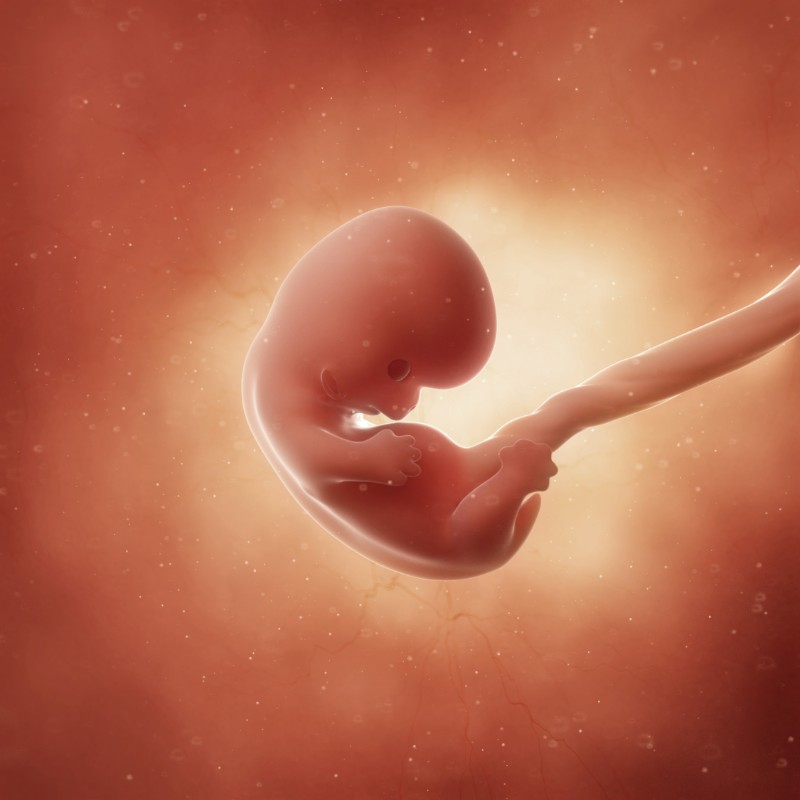 The cerebellum, the area of the brain that coordinates muscle movement, is beginning to develop.

Your baby’s hand plates will appear by today if they aren’t already present. The elbow and wrist regions of the arm are becoming identifiable. The spleen (the organ that produces antibodies and removes worn-out red blood cells and bacteria from the bloodstream) is beginning to develop. The liver is now large enough to produce a bulge in your baby’s abdomen.

Baby’s eyes start to look pigmented, although eye color won’t be established until after birth. The jaw and facial muscles are beginning to form, but the eye muscles complete their development during this week. Baby’s first teeth are starting to develop beneath its gums.

The hand plates will develop ridges indicating where your baby’s fingers and thumbs will be. As the process of forming the digital ridges continues, baby’s hands will look like the shell of a scallop.

By the end of this week, your baby will measure 10-15 mm. It is so small it would fit into a peanut shell, and it weighs less than the peanut that came out of that shell.

Your baby is growing at a phenomenal rate. If your child grew as fast right after birth as it is growing right now, it would measure 15 feet tall by the time it was one month old.

No matter how happy you may be to be having a baby, you may experience a mild degree of irritability or depression during these early months of pregnancy because of the biochemical fluctuations that normally take place. Changes in neurotransmitter levels (the substances that allow nerve cells to communicate with each other) and hormones are primarily responsible.

Your skin may start to break out in spots or dry out. Complexion problems are due to an increased secretion of oils and the hormonal changes of pregnancy.

The metabolism of glucose may play a role in morning sickness. To make sure your glucose level doesn’t fall too low by morning, it might help to eat a light, healthy snack before going to bed.