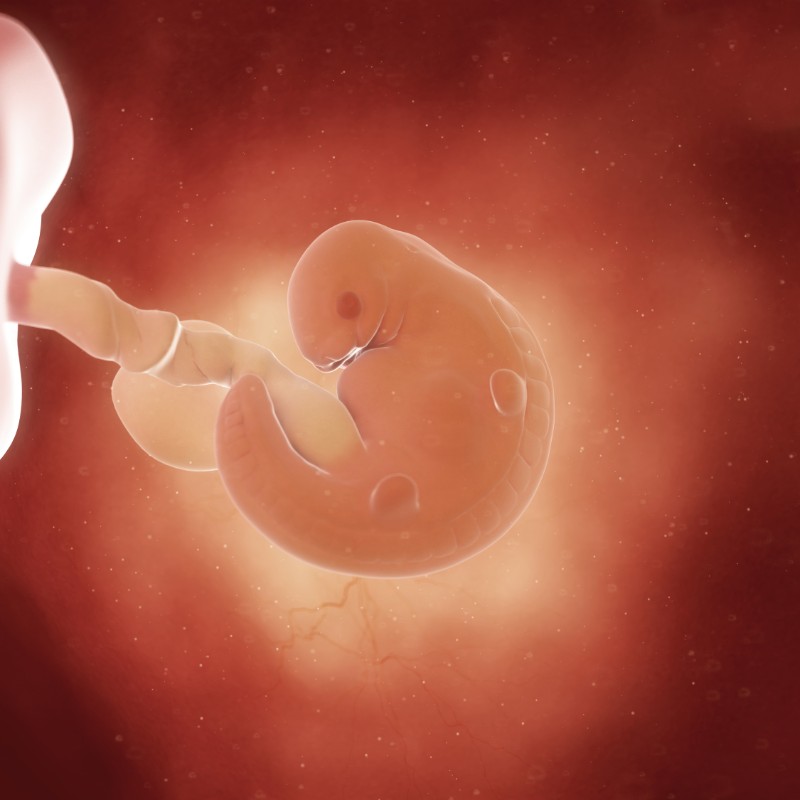 The chest and abdominal cavities are continuing to form. Your baby’s jaws are appearing, the lung buds are forming, circulation is being established in the mesoderm and yolk sac and the lining of the placenta is developing. Soon, the umbilical cord will be established as the lifeline between mother and baby, transferring nutrients and oxygen.

The tiny buds that form the arms will suddenly appear this week. Liver and pancreas buds are also present. The aorta of your baby’s heart is forming.

This week marks a critical period in the development of your baby’s intestines – they are beginning to form from a portion of the yolk sac.

By the end of this month, your baby will have completed a period of growth that involves the greatest size and physical changes of its lifetime. By the end of this week, it will be 10,000 times larger than the fertilized egg.

You may have noticed that you’re experiencing some of the same emotions that often precede menstruation: moodiness, irritability, tearfulness. While some of these feelings may have a psychological basis, most of the time they are just natural reactions to your body’s changing levels of hormones and can be amplified by your environment.

You may begin to notice a need to urinate more frequently. This is normal and caused by pressure on your bladder from your growing uterus along with an improved metabolism that helps your body eliminate waste more quickly. Your breasts may feel fuller, heavier, and tender. You may also notice the areola (pigmented portion of your breast) darkening somewhat.

Childbirth Then and Now

Since the eighteenth century, Western women have been advised by their physicians to restrict their food intake during pregnancy in order to keep from gaining too much weight. At that time, malnutrition was prevalent, and malnourished girls often developed narrow, misshapen pelvises. Since such a pelvis made it difficult if not impossible to deliver a normal-sized baby and threatened the life of both the mother and the child, all women (even well-nourished ones) were encouraged to limit protein, calorie, salt, and carbohydrate intake during pregnancy. We know now that women without structural problems caused by deficiency diseases should not diet during pregnancy, but such advice was widespread in the United States even as late as the 1960s.

Things to do at 6 weeks pregnant