1 out of 1 people found this helpful 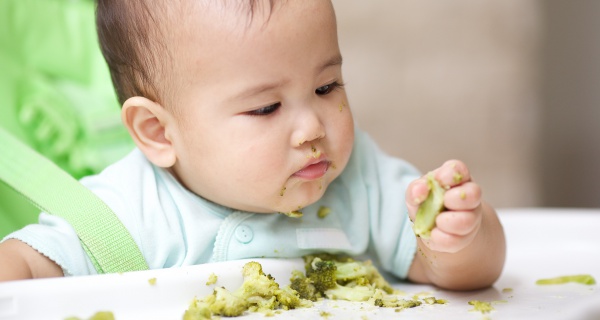 "You fed your baby what?". I'll never forget that moment. I was visiting a friend, a first-time mum with a three-week-old baby, and mentioned that my six-month-old had sat at the dinner table with my husband and I the previous night and happily tucked into a bowl of pasta with spicy tomato sauce, cheese cubes and a slice of garlic and herb bread.

We had been following the basic principles of baby-led weaning for the past month and, as it was working well for us, never stopped to think that what we were doing might be perceived as a bit odd and perhaps slightly inappropriate by other parents who hadn't heard of this weaning technique.

You're probably aware of traditional weaning methods; baby rice, watery porridge, purees of oddly-paired fruits and vegetables (I, for one, have never been offered a combination of butternut squash and pear at any restaurant). Have you ever tried these foods? Probably not. And if you have tried them, did you like them? More importantly, would you want them for your main course? Probably not. You'd want real food. So why do we feed these things to our children?

The concept of baby-led weaning involves allowing your child to feed herself right from the start of the weaning process and throws out the rather controversial question of "when is the right time to wean?"; Baby eats when she's ready to do so. You'll usually find that this coincides somewhat with the current guidelines issued by the World Health Organisation; that weaning should begin at six months. At around six months old, many babies start to perfect their reaching and grabbing techniques as well as their hand-eye coordination, making it an ideal time for baby-led weaning. However, you might find that your little bundle of joy is reaching for food at five months old, or perhaps shows no interest until seven months. This is OK! After all, babies develop at their own pace, why should weaning be any different?

You can begin baby-led weaning by offering Baby some basic foods to get a feel for. It is best to start with simple foods that will be easy for her to hold. Try peeling and cutting a carrot or apple into pieces roughly the size of a thick chip. You may wish to gently steam hard foods first, but they should remain relatively firm - the idea is that Baby will 'gum' the foods to eat them, we don't want large chunks breaking off in her mouth. It is best to avoid 'slippery' foods such as peeled peaches or plums unless you want a very frustrated baby on your hands!

Now, I know what you're thinking. When I tell people we practice baby-led weaning, one of the first questions I'm asked is "don't you worry about choking?". Yes, of course, I worry about choking, as does every other mum, but I don't worry about it specifically in relation to baby-led weaning. Babies are far more clever than we often give them credit for and instinctively know to chew or 'gum' their foods in the front of the mouth before moving the mush towards the throat to swallow.

Don't expect miracles the first time you try baby-led weaning, or the second, third, tenth time! You may find that your baby just plays with her food for a while until she's familiar enough with it to put it in her mouth. This is entirely normal and is just your baby's way of learning about this new process. Don't forget that the only food she has ever known has come from the breast or bottle.

As Baby starts to settle into a weaning routine, you can begin to introduce a wider variety of foods. Parents practicing baby-led weaning tend to offer Baby the same foods that they themselves are eating; one of the theories behind the concept is that involving a child in family mealtimes from a young age is as much a part of the weaning process as the eating.

Nottingham University recently studied 155 children, some of whom had been weaned in this manner, some of whom had been weaned traditionally. The results indicated that those children who had been primarily spoon-fed developed a sweeter tooth and were therefore much more likely to be showing the early warning signs of childhood obesity. It was also found that children who were given 'normal' meals as opposed to vegetable purees were far less picky eaters.

So why not give baby-led weaning a try? If you or your baby don't like it, that's fine, you can choose to switch back to traditional weaning at any time. The great thing about baby-led weaning is that it doesn't have to be a strict either/or situation. If you fancy giving your baby a store-bought jar of pureed cottage pie one day, then go for it. If you want to give her some sliced meat and chopped potatoes the next day, then great. Play around, experiment, have fun and find a method that works for you!