Should this be in 'Pregnancy'???

Well you will have read in my tuesday post that my waters went at like 1 am, kept gradually leaking but nothing happened. In the afternoon I phoned the delivery suit, because I know that after 24hours of waters going there's a risk of infection and I had no signs of labour starting. They asked me to go in later on to monitor baby, but said that if all fine I could go back home again in the hope labour would start in the night.

At hospital the monitoring started off fine, but then the heart rate dipped right down; although this was after the baby moved and then when it moved again the heart beat went back up so they said it could be that the machine just lost it's trace. So then I had to stay on the monitor for another hour! But it was totally fine and baby moving loads too. So the midwife said she was happy and that she would have to just take a swab to make sure no infection and also get the registrar to officially allow me to go home. Registrar came and said I could go. Then off midwife went to write up my notes and get the swab stick, so I stood up to go for a wee and immediately had a massive contraction, they then started coming about every 2/3 minutes. Steve had to help me back out of the toilet as I didn't stop contracting. By the time the midwife got back with the swab she asked if she should examine me and I was 4 cms dilated. She said if I went home straight away she'd ring the community team and I'd get my home birth later that night, so she went off to the phone and Steve went off to the toilet. I then called to her at the phone station that I wasn't going anywhere as the journey back home was half an hour. I went onto the delivery suit and another midwife was pottering around telling me I was welcome to have a bath etc, then she left us in the room. I couldn't move. I sat on the bed and Steve virtually tore my trousers and knickers off me as I was getting no time or energy between contractions. I started to make the deep grunting sound and the midwife came in and said "You're not pushing are you?" I said no but after 3 more contractions I needed to push and said to the trainee midwife "Can I push?" She said "I'm just going to go with you, if your body's telling you to push".
So I pushed for 4 minutes and out he came.

I was in labour for a total of 56 minutes, that was 52 minutes of contractions and 4 minutes of pushing baby out. It took me 9 minutes to get the placenta out!

It was so cool, as I was sitting really upright I literally looked down and could see his head as it came out and then the rest of him. I asked what 'it' was and they pointed him toward me so I could see 'it' was a boy.

Alfie James!! He weighed 7lb 1oz. Born at 8.26pm, 3 days early. He was the trainee midwifes 40th delivery which meant she could then qualify, so she brought me one of her chocolates to say thankyou. Everyone I'd seen-the registrar etc all came in to see me because they couldn't believe I had just popped a baby out when shortly before they'd been talking to me on the other ward about to send me home. We went home 2 hours later, obviously very late but I hadn't eaten since the morning so we pulled up at a Mc.Donalds at 10.55 just before it closed and ate in the car, best meal ever!!

As it turned out the community team had all been called in that night with staffing issues so there would have been nobody to deliver Alfie at home anyway; and if I had phoned them from home and been told to go in I have a feeling Steve would have been delivering him either in the car or at home before we'd even gone anywhere.
So we are now proud parents of 3. The kids are intrigued by him, although it was a little over-whelming for Summer yesterday as it was her birthday and all the excitement was abit much.

Here he is, Alfie James about 12 hours old 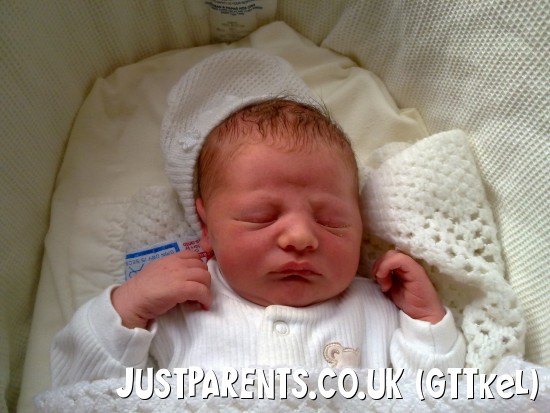 I'm so pleased for you and Alfie is adorable

Here is an updated picture of Alfie asleep on his daddy. 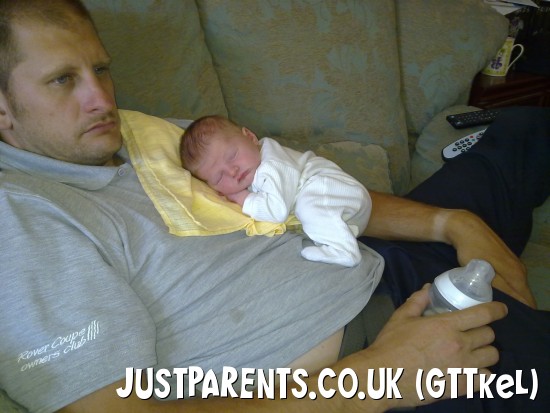 Alfie is so adorable and cute and is that ginger hair I see? I love ginger hair it looks so amazing on a tiny little new-born. Congrate son your birth

Ok now isn't he just as cute as a button! SUPER CONGRATS!!!!!